As an interviewer, in less than 1 hour, you’ve got to “get under the bonnet” of all the coached and rehearsed answers that candidates will give you, and ask those small few questions that ensure you make a sound hiring decision. It’s a tall order but doable!

Although I must admit that I recommend more than 1 interview and I also recommend the use of other assessment tools such as psychometric tests, aptitude tests, in-house tests specifically relevant for the role and organisation, scenarios and presentations.

The good news is that behavioural interview questions are a proven way to “get under the bonnet” of a person and see what they are really like in certain areas that matter most to you.

It’s a method of looking at past behaviour, which will predict their future behaviour.

In a recent survey undertaken by LinkedIn, over 60% of hiring managers said that interviewing for soft skills is difficult.

When asked to prioritize some of the most important soft skills they look for during interviews, here’s how they ranked the following six in order of importance: 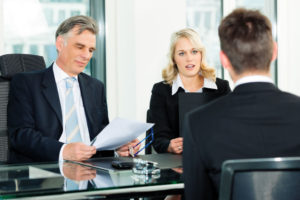 Let’s look at how to ask these all important questions and probe to get telling answers.

You want to hire a Manager who has some experience of leading and managing a team from a Team Leader or Supervisor perspective. You’re wanting to see what he/she is like, what approach they adopt, what style they use, what results they get, how they cope with different personalities, and so on? You don’t want rehearsed answers and coached statements that are generic without much detail.

It’s good to start with asking the candidate to describe the change in the performance of their team from what it was like when they started with the team and what it is like now.

You should ask them to select a particular situation, probably from a specific time on their cv, with a specific team.

The candidate should not be allowed to wander all around their cv and over a myriad of jobs talk generically and without much detail about people here and there and teams here and there.

Preferably, ask them to pick a recent team example, and then ensure they stick to that.

You might probe to ask what they did to improve the performance.

What were the issues? How did they assess what the issues were?

What did they find worked best?

What would they not do again?

You might ask them to describe an example of where they had most success, a particular situation which they are most proud of.

You should ask to see what problems did they encounter, and what they learned from that.

Finally, ask them, if they had to give a speech on how to lead and manage a team to even higher levels of performance, what would be their Top 5 things they would recommend, based on their own experience with that team.

Are they fast learners?

In the current workplace, you may be more interested in hiring someone who shows a thirst for learning. You want new hires with a ‘can do’ and willing to learn attitude.

A great question you could ask, and then follow up with probing questions is – describe a complex situation in which you had to learn a lot quickly. Ask them to talk you through the example, what they new at the start, what they learned, and what they knew at the end. Try and tease out how they went about learning all the new stuff. What excited them?

Sometimes you want to see if people have made mistakes, will they admit to them – which is often seen as a weakness but truly isn’t – and what have they learned as a result. You might ask them to explain a recent mistake or error that they made in their work. Ask them to talk it through. What did they learn from it? Would they take the same approach again or would they do if differently next time?

You could also ask them in which specific areas of their work in the last year were they most passionate about and which bits they greatly expanded their knowledge in? Probe for details and specifics.

You should have of the order of 20 great interview questions for your 1 hour interview. I find that having a conversational approach, rather than a very structured, stiff and formulaic approach, leads to better quality interviews, during which you will learn a lot more about the candidate, and they will reveal a lot more about themselves. If you stick to solid examples from their CV, more recent examples are best, and allow the candidate to talk through those examples, it works well.

Of course, as the interviewer, you have to take control and you have to be able to probe to get well below the surface of those nicely polished, generic and coached answers. You want to find someone’s true personality, can do attitude, and real talents below the buzz words and mumbo jumbo that many candidates present these days.