Background to the Fair Dismissal Complaint

The claimant had worked for four years at the AIBP plant. The terms and conditions of his employment had been explained to him with the help of a translator. He had signed a summary at the front of the contract of employment. The grievance and disciplinary procedures were displayed in a laminated case in the employee’s locker room in both English and Ukranian.

The case against him was that he allegedly struck another employee on the production line, and as a result, and as per the disciplinary procedure was suspended on full pay pending an investigation.   The company submitted that the manager held a meeting with Mr. Denyseuych where the allegations were put to him. He asked the claimant for his side of the story. The claimant told him that there was verbal banter between himself and a colleague. When the colleague struck him in the back, he retaliated by striking his colleague on the face.

At the investigation meeting he was offered the opportunity to bring a representative, which he refused. He did however, bring an interpreter as his English was poor.   The production supervisor said that on the day of the incident, he noticed a commotion and when he went over, the two individuals were “holding on tightly to each other”. They had been fighting but the supervisor had not seen who started it. He said that Mr. Denyseuych had been a good worker and had not been involved in any incidents previously. As part of the investigation, he had asked a number of individuals if they had seen the incident and they all denied any knowledge of how it started.   The claimant in evidence told of problems he had noticed at the plant regarding discrimination on previous occasions. He had attended an induction course when he started. His terms and conditions of employment had been outlined at this course and a translator had attended to translate all documents. He had complained about heavy lifting to the health and safety manager on a number of occasions.   On the date of the incident, he had quarreled with his colleague in the canteen while on a break. The quarrel had continued to the factory floor. He was carrying trays and when he passed his colleague’s table, he was punched in the back. He put the tray down and turned to face him. The colleague had left his workstation and approached him with a clenched fist. Mr. Denyseuych submitted he pushed him away and his colleague punched him in the face breaking the skin on his lip. The claimant pushed him in the chest but did not hit him in the face. When the supervisor arrived, he was holding his colleague by the shoulders.   They were both told to attend the office. He gave his side of the story over a forty minute interview and said that he was trying to defend himself. At the final meeting, he was not told of an appeal procedure but he had told the manager that he was going to seek his own advice. He refused to sign the statement at the end of the meeting because it said that he had struck his colleague in the face. He did not know that he could submit his own statement. He submitted that he had not been told to bring a witness to the meeting. 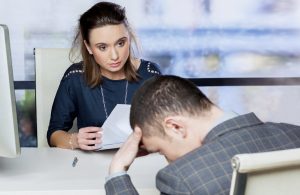 A factory worker gave evidence through a translator. He had been close to the incident on the day in question. He heard an altercation and saw the claimant being punched in the back. The claimant tried to defend himself while his colleague was “throwing punches”. Nobody had asked him to give evidence during the investigation. Under cross-examination, he confirmed that he no longer worked at the respondent company. He had been dismissed for falling asleep on duty. He denied he was giving evidence for revenge purposes.   The manager interviewed the other colleague involved and came to the conclusion that he had no choice but to summarily dismiss Mr. Denyseuych. The matter was too serious to overlook.   He told the claimant that he was dismissed on the 6th September 2005. He did not formally inform him in writing as he felt that verbal notice was sufficient at the time. The other colleague was also dismissed. The claimant did not appeal the decision to dismiss.   The claimant later claimed unfair dismissal.

The Tribunal determined that the company acted within the procedures as set down in the grievance and disciplinary procedure and were satisfied that the claimant was aware of those procedures. The claimant was involved in an altercation on the factory floor where dangerous implements were available at hand. He and his colleague had a dispute which lead to a physical altercation and both were summarily dismissed for gross misconduct. The Tribunal were satisfied that the company acted appropriately considering the gravity of the situation and therefore determined that the claim made under the Unfair Dismissals Acts, 1977 to 2001, failed.

The employer successfully defended this claim by having contracts of employment, grievance and disciplinary procedures available in the native language of their employees and ensuring that they were accessible and understood by all employees, and by following those procedures as outlined and applying the principles of natural justice.   Case: Denyseuych v A.I.B.P, Employment Appeals Tribunal   If you would like help in this matter, please contact us via email or Call 01 866 6426